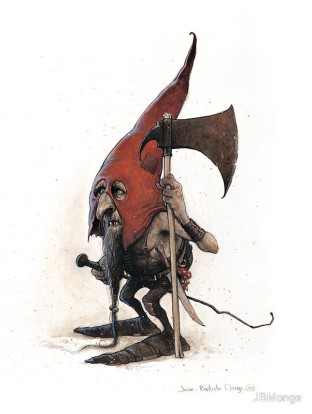 The castle should be empty, but as we pass through open doors, the sound of iron-shod feet confronts us, pattering madly. We came wondering, but not, perhaps, believing – now, we know the story to be true. It is the Redcap, haunt and horror, too fast to escape and so we do not move.

We stay together, watchful, wary, and when the sun sets, hear the screams and run together, but we know what the creature will do.  The sound of feet, the sound of mad, dark laughter – we watch, from a distance, wishing to inspire no more death, as he bends over a body.

An old, small man he seems, but armed with a long iron pike that he grips in talons fiercer than a predator bird’s. His feet beat against the ground while he stands, one then the other, heel then toe.  His cap is in his hand, and he drains blood with it, the red invisible in the dark. He hums, but the melody is nothing human.

Having been witness to the horror, we retreat, but slowly. If the blood begins to dry, he’ll seek another victim. If we run, we might go far, but never fast enough.

Better not to be noticed. Better to hold our breaths.

Have a suggestion for a creature that belongs in the Bestiary? Leave it in the comments!