The Other Alpha: Book one of the Alpha & Omega series! This novelette starts the tale of Stelios, twin of Luka from my Luka’s Pack series, and Niketas, the omega Luka’s pack. 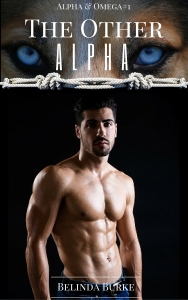 From the back cover: Luka’s been having difficulty with one of his pack – the one who should be the least likely member to cause trouble. His omega, Niketas, has grown suddenly defiant. A little observation is enough to convince him that the problem is a feeling, or at least a desire. Niketas wants Luka for a lover…but Luka has no interest in men.

Stelios is Luka’s twin, but the two are almost opposites. Stelios is rich, a business man with his own company. He lives in the city, away from the mountains Luka and his pack prefers…and Stelios does like men. When Luka’s omega turns out to be a stunning, dark haired submissive with no idea what submissive really means, Stelios is caught.

There can be pleasure in punishment, but Stelios will only take as much as Niketas is willing to give. Can Niketas get over his fixation with Luka enough to give in to what he really wants? Or will pride keep him from submitting to this other Alpha?

The Other Alpha is available exclusively  on Amazon, both alone and as a part of the Alpha & Omega box set!