This bit  of erotica comes from Anna In August, now available Here in celebration of the pre-order of it’s sequel, Sophie In September! Enjoy!

Anna knew without being told that none of them were going to fuck her unless he did, and she wanted him to. She wanted him inside her more every minute. Her orgasm was building inside her with every flutter of tongue against her clit, every thrust of Luka’s cock into her mouth, and she was desperate for it.

“You going to come Anna?” Luka’s words filtered through the heat, and she groaned her answer around his cock.

He tightened his fist in her hair, and the sensation sent a shock through her whole body. “Not until I do.” She shivered, wanted to complain and instead tried to make Luka come. She sucked harder, faster, reached up with one hand to stroke the part of his cock that she couldn’t get into her mouth, teased the tip of it with her tongue and did her best to repeat everything that made him groan and pull her hair.

The moment before Luka came she knew he was going to, felt his cock thicker in her mouth, his thighs tense under her hands, heard him groan louder, longer than before, then tasted bitter salt and shivered. He kept his hands in her hair, fucked her mouth through his orgasm. Then he pulled back, let go and grinned down at her.

She was suddenly aware of the mouths working between her thighs again, of lips that fastened around her clit and start to suck. She started to turn her head, to look down at them, but a hand that wasn’t Luka’s fastened in her hair, tugged her around, and another cock, more slender, was in front of her lips. She looked up, startled, and saw brown hair, and brown eyes with lust in them. Ares.

Luka spoke from somewhere she couldn’t see. “What are you waiting for, Anna?” Tongue. A lash of tongue all over her clit, exposed and tortured and oh, so good.

“So good—” Then that second tongue was back inside her, stabbing into her pussy again and again, licking her up inside while her clit was sucked and teased, tormented by soft lips.

“Oh god I’m coming— coming—” Anna shut herself up with Ares’ cock, sucked on the head of it and groaned at the taste of him, so different from Luka.

This bit  of erotica comes from a new smut short, Anna In August, just like week five! (So if you haven’t yet, read That One first!) This particular bit is where the smut starts to get really steamy…so enjoy!

Anna tried to think, but she could barely breathe. Luka was – a wolf? A werewolf. They were just a myth, but this myth had a tongue with which he lapped up her throat again. This myth had a body that was muscled and broad, hot and hard, all man, and she heard herself moan.

I’m going insane. That had to be it. She didn’t care. She wanted him to kiss her again, was suddenly certain that no man was ever going to kiss her like Luka had. She wanted him to do more than kiss her, wanted him to touch her, fuck her, and even as she had the thought he bent to her mouth. Luka bit her bottom lip and sucked on the tip of her tongue, and she lifted her hips and felt his cock pressed against her, huge and hot and hard. She shuddered, moaned. He was going to put it inside her, he was going to fuck her with it, she knew it – she wanted it.She wanted it so bad –

She felt heat against her back without any warning, and knew it was another man. No – another monster. He was as hard and hot as Luka, naked abs burning Anna’s skin through her shirt and his cock pressed tight against the curve of her ass. Luka tilted her head back until she was forced to break eye contact with him and met a dark brown gaze instead, then slid his fingers down her throat to her nipples and thumbed them through the lace of her bra.

Luka pulled at them, and her gasp let brown-eyes’ tongue into her mouth as he licked at her lips. So different from Luka, this kiss, but almost as good. Whatever fire had been lit in her was burning brighter, hotter, and she didn’t protest when the man behind her pulled her shirt down her shoulders and off, then slid his fingers to the clasp of her bra and undid it. He slipped the straps off her shoulders and dropped it on the ground, cupped her breasts with both hands and started to tease the points of her nipples.

At the same time Anna felt Luka’s fingers inside her panties again, spreading her open to his touch. He toyed with her clit, the tips of his fingers almost too rough when he squeezed it, rolled it around. She groaned again, rocked against the body behind her, then almost jumped at another touch on her side. That was too many hands! Not just Luka’s, not just another pair, more. Who? All of them?Were they all going to – to –

Luka slid two fingers inside her, kept rubbing her clit with his thumb, and for the life of her Anna couldn’t think any more why it mattered. She looked to one side through half-shut eyes and saw a pair of dark haired men stripping, staring at her as Luka fucked her with his fingers. Together, they closed their fists around their cocks, and she shuddered, squeezed tight around a third of Luka’s fingers and wondered if he would fuck her now if she begged, or if he was going to make her wait.

The hands on her were stripping her again, distracting her, and she felt, not just hands, but more. Someone’s mouth was on her thigh as he pulled off her jeans, kissing, teasing, and she looked down and met the eyes of one of the two she’d seen stripping.

Someone’s tongue was on one of her nipples, but Luka growled in the next moment, and whoever it was retreated so that Luka could lower his mouth and suck instead. Anna pressed her breasts up toward his tongue and two pairs of hands settled on the waistband of her panties. They started to slip them down her legs, and she spread her thighs to make it easier.

Luka chuckled against her skin and slipped his hands back around her hips and down to cup her ass.

A wet finger slipped between her buttocks, started to press inside her, and Anna gasped, bucked up against him and felt his other hand back where it had started, two fingers deep in her pussy again, twisting, stroking inside. She jerked, started to fall, but the man behind her caught her, and more than one pair of hands stroked her arms, her legs, and held her up off the ground. She felt hard muscle against her back, someone’s chest again, and reached up and back to wrap her arms around his neck.

Luka started to fuck her with his fingers again, three in her pussy now, two in her ass, and she stared down at him with her mouth open, couldn’t make a sound.

One of their mouths was at her throat. Someone’s hands were teasing her nipples, someone’s tongue on her neck, licking at the bruises Luka had left. Anna heard a low, begging whine, then flushed. That was her noise, and Luka laughed, then pulled his fingers out of her and stepped back between her thighs.

But he stepped around her instead, up toward her face, and she knew what he wanted before he said it, was already opening her mouth. 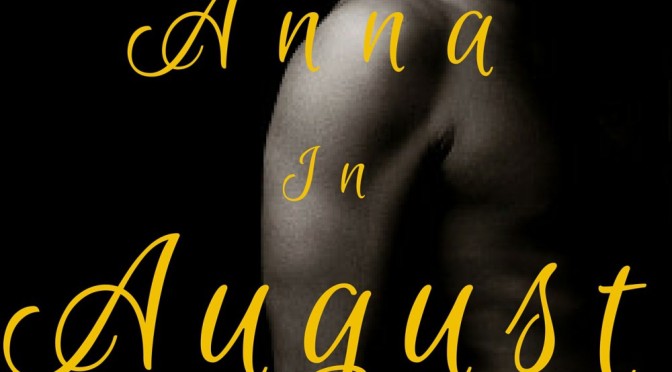 This bit  of erotica comes from a new smut short, Anna In August.  This particular bit is part of an encounter between Anna, suddenly alone on her vacation, and Luca – the Alpha of his werewolf pack. Not that the pack stays on the outskirts for long…

The road went up into the mountain, and then stopped being a road. The woman clung more as they bounced over the rough dirt path, roared up into the trees and then stopped, suddenly, in a clearing where the moon was bright. They all got down at once, the whole pack around him, and they stood waiting, watching, until he finally he got up himself.

He slung down the kickstand, stood and felt the woman’s hands slipping from around his waist. Luca saw her eyes moving, darting, the rabbit-presence returned – and her awareness of him, the predator truth, was moving outward to include the rest of the pack.

They were already close. He shifted closer to her, spoke so that his mouth hovered only an inch from her mouth and their breath mingled as he spoke. “What’s your name?”

In that same, mingled breath, the word fled from her. “Anna-”

His mouth descended on her lips, and she groaned her way out of silence and into his mouth, reached up and held to his arms with both hands. When he lifted his mouth she stared at him, that dazed expression on her face that meant the wolf was winning her over. “I’m Luca, and this is my pack. Anna, you’re ours now.”

He saw her eyes dilating, her lips moving, and she mouthed the word with some confusion. Ours? But his hands were already undoing the buttons of her shirt, then the zipper of her jeans. He didn’t bare her skin, not yet. When she was flushed and coming undone, he’d save the sight of her for then.

Tease the woman, tease his pack. The scent of her was already enough that a hushed whine at the lowest end of the night howl’s spectrum was rising from them, one after another.

He slipped his fingers over her nipples until they became tight, sensitive peaks, drew tingling lines of sensation over them, over her breasts and the smooth, sensitive skin below them. His lips made warm passage from her mouth to the lobe of her ear and down along the smooth, curving column of her throat. Then he stepped back and shucked his jacket, pulled his shirt off over his head. She reached out for him, hungry for bare skin and more contact. Her hands tightened themselves against his shoulders.

This would be torture, he knew it would, but he would endure because this was only the first step, and because he knew that after this, she would not be able to deny him. She would know – and the knowing would make her his. His. Ours.

Their awareness was humming inside him, their hands his hands, and he knew it was time to touch her now. He slipped one hand past the narrow elastic of her panties and felt dampness, then more than dampness as he pressed his finger past the soft lips of her sex and against her clit.