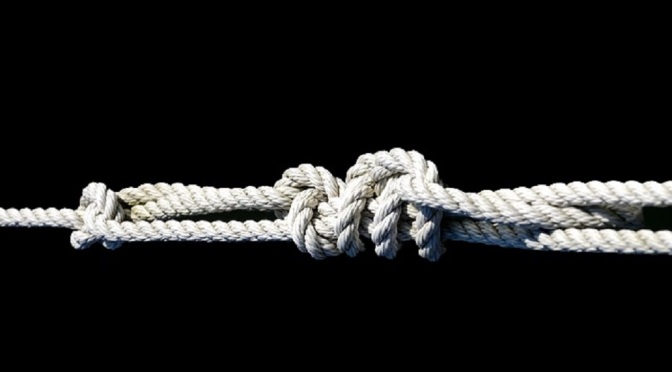 Niketas stayed very still while Stelios hovered over him and started to wrap the ropes around his shoulders and his back. His movements were careful, slow, methodical, every knot laid precisely where he wanted it. He wrapped smooth curls of rope around his shoulders, then down over his breastbone and around his chest.

Once he got use to the slow movements, the soft rub of the rope against his skin, it was easy to fall into the rhythm of Stelios’ movements. Around his arms, left…right…left, then right again…around his chest, and he sucked in a little breath when Stelios rolled the rope over his nipples.

Down, the rope around him, around the pillar behind him, diamonds of silk separated by knots over his pecs and down his chest and across his abs. Stelios paused then and stepped back, staring at him critically. “Try to move now.”

Niketas strained, pulled forward, testing, then jerked against the ropes holding him against the pillar. He’d thought he would be able to get free, it was only ropes after all, but there were so many of them wrapped around him, and he was bound so tightly to the pillar all he could do was rock forward a half inch or so.

He struggled in vain, but the more he tried to twist his arms free the tighter the ropes around his chest held him, and when he pulled at those the ropes holding his wrists behind his back, tied to his waist, made him arch more against the pillar behind him.

He growled, tugged harder, harder, until he was panting, sweaty, aggravated and angry. “Let me go – goddamn it, I don’t want to be -”

“Really? Because your cock is dripping all over the floor, Niketas.”

He dropped his eyes, and stared at his own erection as if it was betraying him. Fucking god it was true, he was leaking all over the place. Stelios grabbed him by the jaw and forced him to look into his face.

“I don’t like you lying to me. I don’t like you telling me you don’t want this when you do. If you really want out – if you want to go back to Luka and stay on that damned mountain and never find out why you’re here, I will let you go. I’m giving you a safe word, you understand? Not stop, not ‘no more’, not please. Let’s say…umbrella.”

Niketas snorted, and Stelios shrugged. “Not something you’re likely to shout at me no matter how much I take you, is it. So? It counts now – if you really want me to stop, tell me and I’ll let you go before I really get started.”

Niketas felt his flush spreading, down, down, from his cheeks to his chest. He couldn’t say it. He didn’t want to stop. Stelios had barely started, and he thought maybe…maybe his idea of punishment would involve taking his cock. He wanted it, and if he let Stelios do what he wanted… Anyway, he didn’t think he had a choice – not between what Luka had told him and Stelios’ desire to keep him here.

“For now, hm? Good.” Then he reached for the trailing ends of the rope, tugged the last knot into place below his navel, then started to wrap the rope around the base of his cock, down around his balls and under, up over his buttocks and back into another loop around his waist. Niketas jerked and swore, then groaned.

“’S tight – Stelios…ohhhng. Fuck.” Warm and rough, Stelios’ fingers teased the tip of his cock, smeared his slick around over the head and down as he stroked. “Oh – oh don’t stop, fuck that’s good -” There was something amused in Stelios’ expression, and Niketas didn’t understand, didn’t care.

He lay his head back, closed his eyes and thrust back as much as he could into Stelios’ hand. He’d had plenty of women touch him before, but no men, and he liked the difference more than he’d thought he would, the rough way Stelios gripped him, stroked and twisted his wrist around the tip of his cock.

“It’s supposed to be. Now…” He walked across the room to one of the bureaus but only crouched and opened a drawer. Niketas couldn’t even turn his head enough to see what was inside, but he had his suspicions.

He couldn’t tell what Stelios had brought back with him, but his fist was closed around something, and Niketas only jumped a little when Stelios came back and he felt warm, slick fingers between his buttocks, over and around his hole, barely pressing inside. Then one dipped in, pressed deeper, curled inside him as Stelios fucked him with it and Niketas bucked up, then pressed back against the penetration. He moaned, spread his legs wider, and Stelios chuckled.

“Oh? I thought I was going to get more denials.”

“I don’t care what you want, you’re going to take what I give you.”