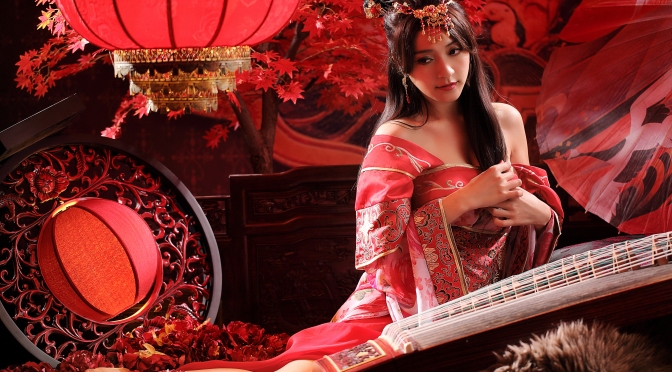 Since the magic of #1lineWed and Camp NanoWriMo coincide for the first time today, I am going to crawl all the way out to the end of the furthest limb and share not only a bit of context for some of those lines, but a piece from my Camp project, Earthbound!

This lovable doom of a novel has been in the making since my first November attempt at a Nanowrimo, and has grown in the telling…considerably.

The door closed behind the servant, and his sister’s hands pulled Lu Yin down into her bed as she slipped from his arms.
He stumbled away, tangled his legs in the sheets and fell to the floor.
Bells.
But no, there were no bells, only the sound of his sister’s laughter shattering in his ears.
“I know what you want now, Lu Yin.  Did you not want me to know? Or did you want it too much?”
He stood slowly, disentangled himself from her sheets and tossed them back on the bed. Red silk pooled around her legs, and she drew it up, up, over her knees, her thighs –
“Are you listening, elder brother?” He wet his lips. “You should be listening. You should -”
“Enough!” And then, more quietly. “Enough.” He pinned her to her pillows, and oh, those eyes.
Blue, so flashing, all the amusement in the world when she was on the verge of breaking him – could he not even have the silence to console him?
The silence and the scent of her, when that was all he had.
He held her throat in his hands, slender and bruised, white but for where she had been bitten, and squeezed for a breathless moment. He traced the dark-marked places with slender fingertips, as if they were wounds.
“Why? Who would dare to mark the Fourth Princess?”
Her dancing eyes. No promise of the truth in them – had there ever been? But now the old, dim lifelessness was laughter. Why would she still be so amused?
“I should tell father -”
“You won’t tell father.”
“I must -”
But the pressure of her mouth against his lips brings him to tingling silence. Forbidden pressure. Forbidden kiss.
“You won’t tell father. Or did you never mean it when you said you loved me?”
“I love you.” Helpless. What else to say? What lie could be enough in the face of her certain knowledge, the gleam and promise in her face?
Her kiss tasted green as the wild frontier mountains from which he had come. Her hair, too, smelled of the wild, and the iron taste of the blood on her skin was the taste of war.
There was war, too, in her hands and against his throat. Iron in her eyes, and in her hands.
The point of his own gilded dagger was sharp against his throat as she spoke.
“Did I say you could have me? Did I say, come, take, this which belongs to my lover belongs also to you?” Shadow in her eyes. Shadow in the green of her warm breath against the side of his face.
“No. I did not say that.”